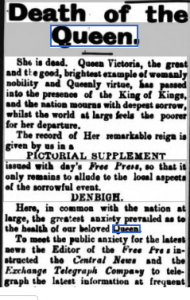 She is dead. Queen Victoria, the great and the good, brightest example of womanly nobility and Queenly virtue, has passed into the presence of the King of Kings, and the nation mourns with deepest sorrow, whilst the world at large feels the poorer for her departure. The record of Her remarkable reign is given by us in a

issued with day’s Free Press, so that it only remains to allude to the local aspects of the sorrowful event.

Here, in common with the nation at large, the greatest anxiety prevailed as to the health of our beloved Queen.

To meet the public anxiety for the latest news the Editor of the Free Press instructed the Central News and the Exchange Telegraph Company to telegraph the latest information at frequent intervals and also copies of the various Bulletins. 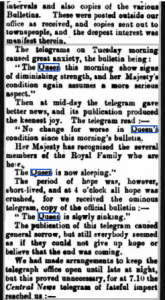 These were posted outside our office has received, and copies sent out to townspeople, and the deepest interest was manifest therein.

The telegrams on Tuesday morning caused great anxiety, the bulletin being: “The Queen this morning show signs of diminishing strength, and her Majesty’s condition again assumes a more serious aspect.”

Then at mid-day the telegram gave better news, and its publication produced the keenest joy. The telegram read:  “No change for worse in Queen’s condition since this morning’s bulletin.

Her ‘Majesty has recognised the several members of the Royal Family who are here,

The Queen is now sleeping.”

The period of hope was, however, short-lived, and at 4 o’clock all hope was crushed, for we received the ominous telegram, copy of the official bulletin:

“The Queen is slowly sulking”

The publication of this telegram caused general sorrow, but still everybody seemed as if they could not give up hope or believe that the end was coming.

We had made arrangements to keep the telegraph office open until late at night, but this proved unnecessary, for at 7.10pm the Central News telegram of fateful import reached us: 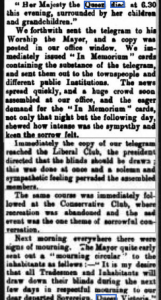 “Her Majesty the Queen died at 6.30 this evening, surrounded by her children and grandchildren.

“We forthwith sent the telegram to his Worship the Mayor, and a copy was posted in our office window. We immediately issued “In Memoriam” cards containing the substance of the telegram and sent them out to the townspeople and different public Institutions. The news spread quickly, and a huge crowd soon assembled at our office, and the eager demand for the “In Memoriam” cards, not only that night but the following day, showed how intense was the sympathy and keen the sorrow felt.

Immediately the copy of our telegram reached the Liberal Club, the president directed that the blinds should be drawn; this was done at once and a solemn and sympathetic feeling pervaded the assembled members.

The same course was immediately followed at the Conservative Club, where recreation was abandoned, and the sad event was the one theme of sorrowful conversation.

Next morning everywhere there were signs of mourning. The Mayor quite early sent out a ” mourning circular to the inhabitants as follows:—” It is my desire that all Tradesmen and Inhabitants will draw down their blinds during the next few days in respectful mourning to our dear departed Sovereign, Queen Victoria.

” His worships wish was almost generally complied with, and it was observable that the shutters were up, and blinds drawn in all parts of the town.

The belle of St David’s and St Mary’s Churches tolled, muffled, at intervals throughout the day.

DENBIGH PUBLIC BODIES AND THE DEATH

The Town Clerk in consultation with the Mayor has sent out notices for a special meeting of the Town Council on Monday: To pass a vote of condolence with His Majesty the King and the Royal family upon the death of our late beloved Sovereign Queen Victoria.” The County Council has postponed its meeting which should have been held to-day.

Yesterday, at the annual meeting of the Denbigh Castle Committee, the president, Mr P Lewis, referred in very feeling and graceful terms to the beautiful life of our late beloved Queen, and moved a vote of condolence with the Royal family is their great sorrow, which was seconded by Col R Lloyd Williams and carried with the greatest sympathy and feeling.

The Swan Lane Independent chapel members abandoned their concert in aid of Tower-bill chapel last night in token of their sorrow at their Queen’s death and sympathy with the Royal mourners.

There have been many other engagements and meetings abandoned, and everywhere in the district tokens of sincere sorrow and sympathy.

FUNERAL OF THE LATE QUEEN

The funeral of the Queen is to take place on February, Saturday of next week. On the previous day, the remains will be removed from Osborne and conveyed to Windsor.

Orders have been given for the Channel Fleet and all his Majesty’s available ships to assemble at Spithead on that day.

By the Queen’s express wish the funeral will partake of a military character, and the coffin will be conveyed on a gun carriage. 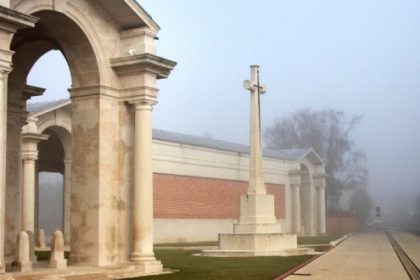 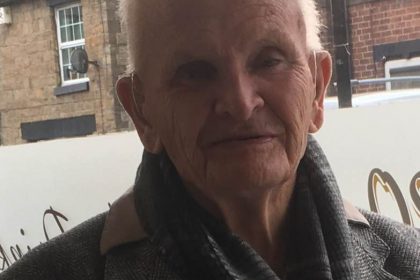 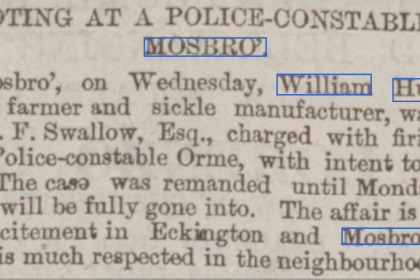 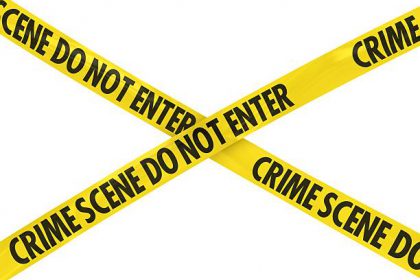